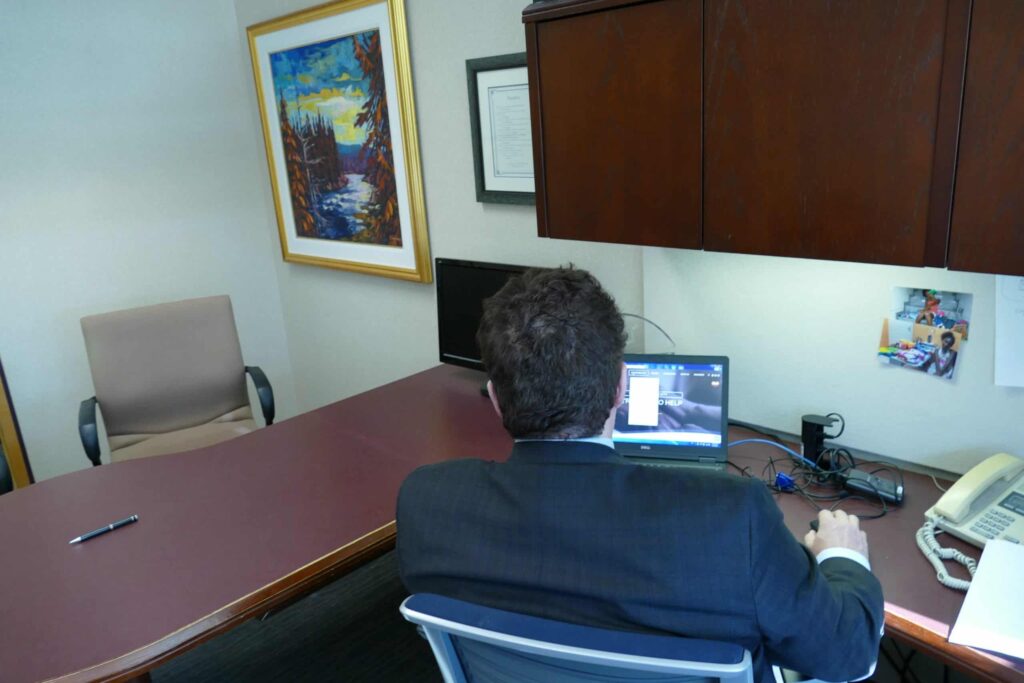 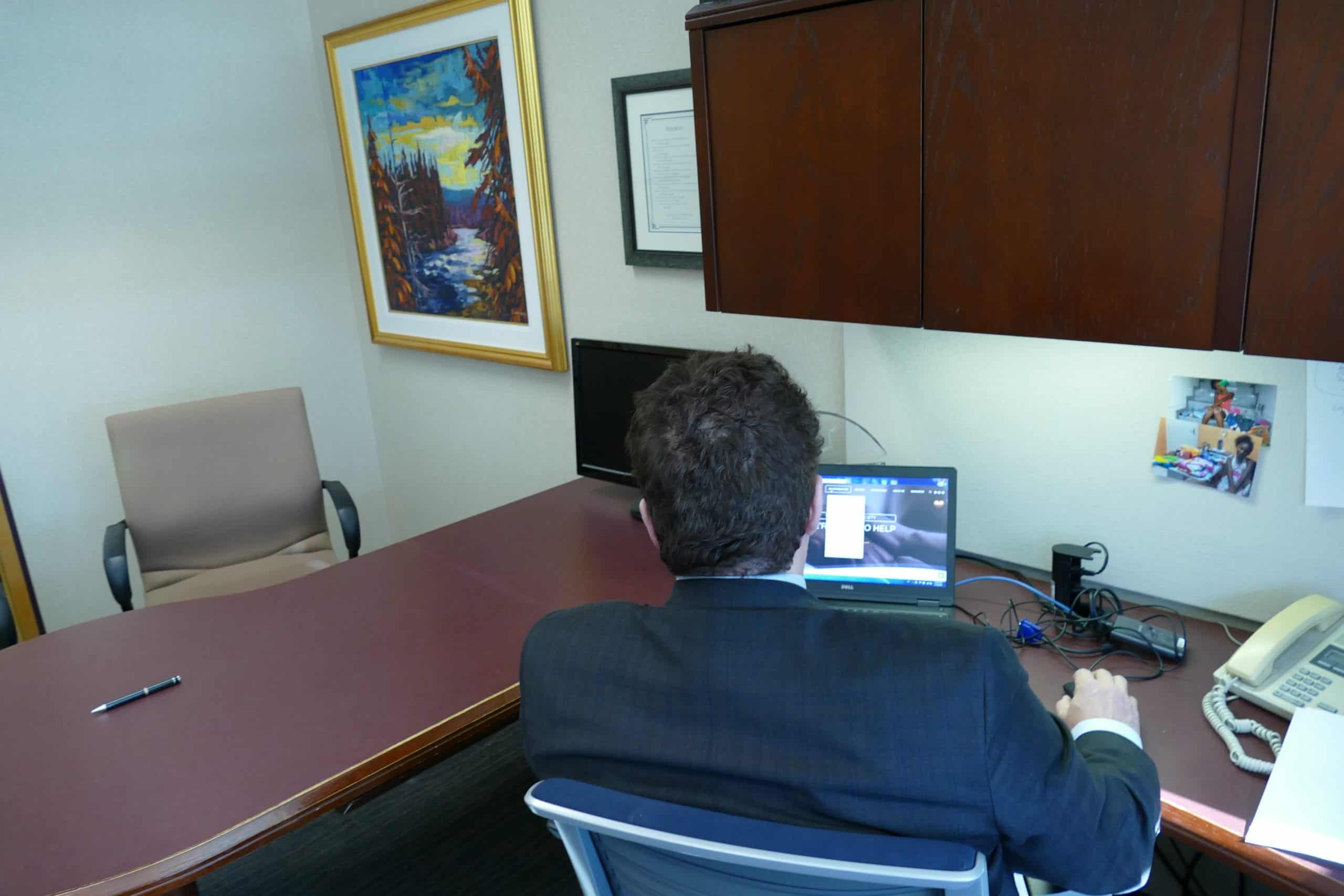 There is an episode of The Simpsons where Homer becomes inspired by tales of Thomas Edison and becomes an inventor. He puts a little chart up on the wall of his workroom, comparing himself to Edison as a way of tracking his own progress and measuring himself against one of the great inventors of the 20th century. Later in the episode he discovers that Edison kept a similar chart, comparing himself to the greatest inventor of them all, Leonardo DaVinci.

I was reminded of this episode soon after stepping into John Cornwall’s office. The first thing I noticed were two huge motivational posters, done in a Simpsons-style. They were created by a friend of John’s, espousing his financial philosophy. They were also an immediate ice-breaker, as I suspect they were designed to be. Many a time two people have immediately bonded over a shared love for The Simpsons.

I was there to do a profile on John Cornwall, major donor to The Dementia Society. This was to involve me asking many questions of John about John, and I quickly discovered that John is probably John’s least favourite topic of conversation. Instead, he wanted to talk about other people. ALL the other people.

One of those people is Chris Keyes, Edison to John’s Homer. The two are fast friends, but John speaks of Chris with a reverence rarely heard when discussing a buddy. Chris is John’s aspirational goal, and in some small sense, his rival. I’m not sure Chris is aware of this rivalry (he is now) but it’s a remarkable one. John wants to give away money. And he wants to do it on the level of his friend Chris, although he acknowledges it is a fairly unattainable goal.

John, a financial planner for IG Wealth Management, does very well. He is heading to Chile later this summer to go skiing in the Andes, something he has done he estimates around 20 times. At home though he lives humbly, some might say frugally. And he does so in order to spread the money he earns to others. He chooses charities where he understands the need, and where the need is greatest.

This may seem like an incongruous life for a wealth manager, someone whose job it is to make the most money possible for his clients, but John isn’t your typical financial planner. The way he sees it, every client who walks into his office is someone he can help. That his specific set of skills are best suited to ensuring that every client lives their lives to the fullest, but in the context of ensuring financial security. He considers himself to be a “social worker in the world of finance”.

Another person John wants to talk about is Professor Comeau, his university prof who sparked his love for economics. This led him down a career path he hadn’t intended, away from the retirement home ownership path – the steps of his father in which he had anticipated following. He speaks wistfully about living in one of those retirement homes when he was about thirteen years old and of Mr. Lamoureux, a resident of that home, who gave him a canoe that John and his brothers would use in a pond nearby.

Living in retirement homes as a young boy might be the reason John is so keenly aware of the needs of people with dementia and their caregivers, but no one in his family has ever been stricken with the illness. He has known a few people in his adult life with dementia, most of whom are clients of his. He tells me about a couple, Bob and Lynda, whose financial plan was significantly altered by several dementia diagnoses in their family. As they unselfishly cared for their stricken loved ones, their original retirement plan went up in smoke.

Then he gets to Iain, a client who became a real friend. John would purposefully book meetings at Iain’s home, not just to discuss finance but to listen to him. They would spend hours together. Iain knew so much about so many things, and kept John fascinated for hours on end. Iain was one of the most interesting individuals that John has ever met, and John describes him as “simply brilliant”. Then Iain was diagnosed with dementia. This part of John’s story is much shorter, as he gets a little choked up in telling it.  Those precious hours he spent with Iain were suddenly cut short, as the dementia came on very quickly. First, the incredible mind John knew disappeared. Then so too did the friend.

Bob, Lynda and Iain are not the reason John Cornwall supports The Dementia Society. His involvement predates his friendship with them, as does his involvement in so many local charitable causes. These are all charities John knows well. He is not a guy who gets solicited for donations, and not the guy who calls into telethons or jumps on the latest Go Fund Me campaign.

Instead, he has researched it all meticulously. As I’m speaking with him I realize the breadth of his knowledge about The Dementia Society – he is well versed in our programs, understands the role of Dementia Care Coaches in the lives of caregivers, and speaks about music as therapy. His donations go to the places where he knows they have the greatest impact. And they go to the same charities, the same causes, year after year. If John were to win the lottery I get the sense that he would not add a new cause, but would instead massively increase his existing contributions. I mean, he’s a finance guy. No finance guy ever does anything arbitrary with their money!

It all stems from one thing. John believes, strenuously and unwaveringly and more genuinely than any other person I’ve ever met, that giving everything you can is the right thing to do. That being said, I have not yet met his friend and aspirational goal Chris Keyes.

John is a devoutly religious man who attends mass three or four times a week. I do not think his generosity of spirit and his desire to spread good everywhere he can comes from his religious belief, I think that lives within him independent of faith. But faith, and religion, certainly puts into context the non-Simpsons posters on John’s walls. If Chris is Edison to John’s Homer, who is DaVinci to his Edison? I need only look around John’s office for a split second before it becomes very obvious. Three posters on his wall are framed, curated quotes from The Leonardo DaVinci Of Selfless Giving – if John can be said to have a role model, this is she.

Just typing that right here is weird for me. Because I am picturing you, the reader, rolling your eyes far into the back of your head and I fear I have lost you. I worry that in describing a man, a Personal Finance professional at that, aspiring to model his life after Saint Teresa of Calcutta I have triggered you to throw this piece away in disbelief. But please, bear with me. Even the most cynical among you. Here’s why.

John Cornwall is the least cynical among you. He is everything he says he is, and also all the things he refuses to say he is. There is nothing false about his humility. There is no artifice in the heartfelt philanthropy one might see in a cartoon version of The Pious Neighbour. He is way more Ned Flanders than he is Homer Simpson, and I think artifice to him would be a pretty difficult deception.

John tells me few personal details, and most are anecdotes to ensure that I have a sense of how to avoid making him uncomfortable. He used to do the radio show “Experts On Call” on CFRA, lending his financial acumen to the community – but he could never sleep the night before and was nervous to the point of nausea before going on air. He does write Personal Finance articles and much prefers that because, as he says, “you can hide behind the ink”.  And there might not be another person in his entire office who knows that John donates huge sums of money to a large number of causes.

It isn’t, I think, that John is intensely private – in the hour we spent together I left feeling like we had become great friends – no secrets between us now! It’s that he is intensely averse to the spotlight, and anything that holds him up as a beacon of philanthropy is bestowing upon him a mantle he worries he hasn’t earned. After all, he’s just a guy who gives away huge sums of money to good causes because he wants other people to have better lives. It’s not like he’s Mother Teresa.

Of course I recognize the irony in profiling a man who is so averse to this kind of profile. I know that when John reads this it will cause him no small amount of discomfort. But I believe strongly that in doing this with me, together we might be able to inspire others to give or to become more involved in their communities. I’m thrilled that he agreed – though his agreement of course came with a couple of caveats.

We reached a compromise where instead of no photo as he preferred, he allowed me to take a photo of him at his desk. So here is the back of John’s head. Perhaps one day he will break down and sit for a video interview. I certainly hope he does, because I would love to share a little more of John with you, and with the world. He is engaging, gregarious and knowledgeable on a variety of subjects, and he has a way of boosting the spirit of those with whom he speaks. I know I left his office feeling inspired, and just a little more driven than I had been when I walked in.

As Mother Teresa once said (according to Google) “let no one ever come to you without leaving happier”.