Caregiver spotlight: Selene Commerford, the best asset a support group ever had 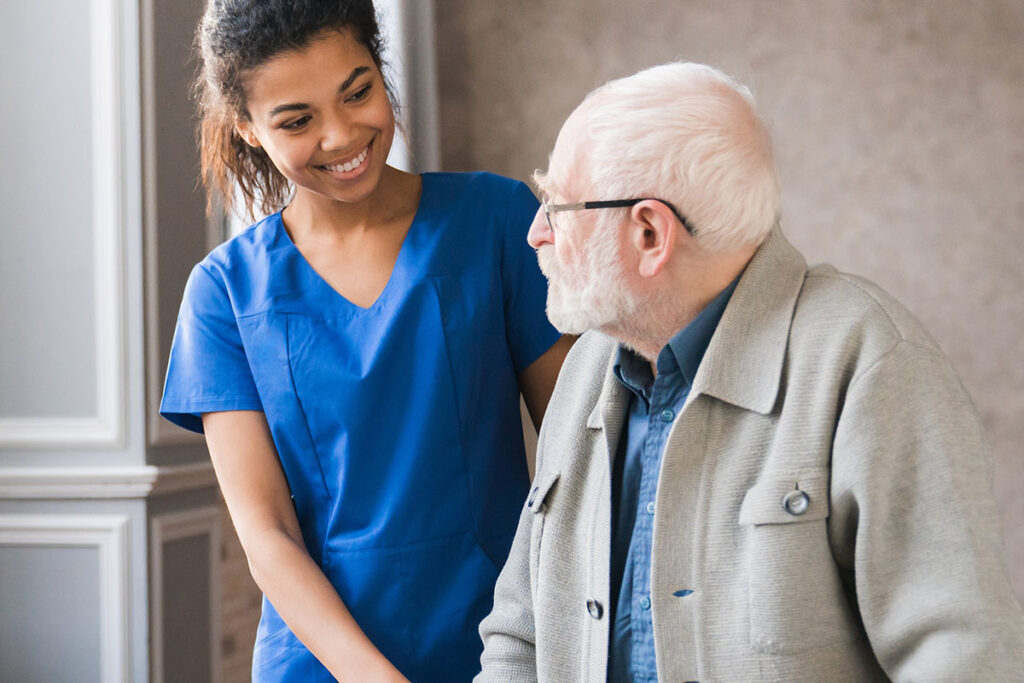 Selene managed to get her mom admitted to the Madonna Care Community, one floor down from John. Her younger sister would have helped out – except that she had just begun a battle with tongue cancer. A few months later Selene’s sister-in-law Ann died with young onset Alzheimer’s. And somewhere in there, Selene’s beloved dog Kika died. Bobby Braddock wouldn’t write this country song. It would be too implausible.

I’m meeting Selene in her office at the Nepean Housing Corporation, a non-profit housing provider specializing in affordable rental housing. She is taking her lunch hour to talk to me, a generous act in that lunchtime might be the only hour of the day she has to herself.

Selene gets up at 5:00 every morning. In to work, home to make dinner for herself and her adult daughter Katharine, who has a developmental disability and lives at home. After dinner she packs up the new dog, a black lab named Fergus, and heads off to the Madonna. She visits John and helps care for him. Sometimes that involves cleaning him up, other times it means enduring a verbal onslaught. John, who in 35 years of marriage never once raised his voice, now has bouts of aggression borne out confusion about his surroundings.

Then it’s upstairs one floor to mom’s room. Fergus runs a second gauntlet of friendly hands looking to pet him, and parks himself by Gina’s bed. Selene has set up this room to look as much like her mom’s old apartment as possible – but it has taken a while for Gina to become accustomed to her new surroundings, and she’s still not quite there. Although she participates in the activities at the Madonna (baking, walking, exercise programs), she complains to Selene every day that there is nothing to do.

At 9:30 it’s time to bring Fergus back home to watch Coronation Street with Katharine and Ricky the cat, an animal Selene tolerates. She took Ricky in as a favour to her son, but Selene is an avowed dog person, and Ricky isn’t especially friendly. After Coronation Street it’s bedtime, and up again at 5:00 the following morning to do it all again.

We talk about “Caregiver Resilience” a fair amount. How do we enhance resilience in caregivers? How do we help them through the tough times? What do they need that we can provide? Caregivers get stretched to the breaking point all the time, and Selene appears to be as stretched as any caregiver we know. So how does she keep it together?

It boils down, she says, to two things. One is a workplace that gets it. The Nepean Housing Corporation, Selene says, has been tremendous. If her mom has an episode, or John has a fall, she gets up and leaves. No questions asked, no finding someone to handle her workload for the rest of the day. She just goes. And she’s certain that if she asked, her employer would have no problem allowing her to take 12 half-days per year to attend her support group.

That is the second thing that helps Selene keep herself together. The support group. Run by The Dementia Society, they meet 12 times a year, and she will not miss a single one. She’s so dedicated to attending the support group that she uses up six vacation days each year to go. She’s got to book the time off in advance. Not because her employer would have a problem with it, but they’re too important to miss for any reason.

This is a place for talking. For sharing stories and troubles and frustrations and heartaches. It’s a place where people can give voice to emotions they would never reveal in any other company. It’s now like a second family to Selene, and she is as serious about the group as she is about her husband, her children and her mom.

Recently, the support group swelled to such a size that there was talk of splitting it in two. One half being those who had been there longest, with loved ones in the later stages of dementia. And the other half made up of the newer arrivals, whose loved ones were closer to the early stages. This idea was shouted down immediately. The newer arrivals had to hear the stories from the more experienced members, which was the whole point. Selene remembers one newer participant saying:

“What you’re telling me is really scary. And that tells me I’m supposed to be here.”

John and his entire family have an extremely rare gene mutation, a dominantly inherited Alzheimer’s Disease gene. That means that everyone in his family has about a 50% chance of getting the gene, which means they have about a 50% chance of developing Younger Onset Alzheimer’s Disease. Ann had it, John has it, his brother Frank might have it. And Selene’s son Ken might have it. Neither Frank nor Ken want to know their status.

It is so rare that the family is participating in a trial that’s being run out of many facilities. Frank goes to McGill in Montreal for the trial, Ken now goes to Boston. We will bring you more on this story, and the trial, at another time. Today, on National Caregiver Day, we want to focus on Selene and her immense emotional courage in the face of so much adversity. The Dementia Society salutes this remarkable woman and her entire family. Selene is an incredible asset to our support group, and an outstanding profile in resilience for caregivers everywhere.