Scroll Down
Individuals Living with Dementia

With the help of the Dementia Society’s program SPARK!, Jack found meaning through art. 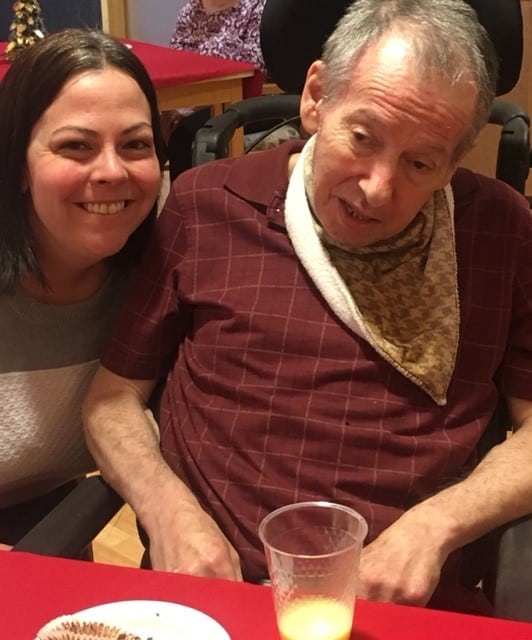 As Jack’s symptoms of dementia progressed, his personality, behaviour, and language changed significantly. His daughter, Brigitte, reached out to The Dementia Society Care Coaches, where she learned ways to keep her dad’s lifestyle as familiar as possible. Jack participated in and enjoyed Spark!, a joint program between the Dementia Society and the National Gallery of Canada, as well as Rayon d’Art, the same program in French.

Jack Philion died in the middle of a pandemic, although Covid-19 was not Jack’s cause of death.

Jack’s daughter, Brigitte, feels lucky to have been able to be by his side at the end. The hardest part was knowing that the last thing he saw was only her eyes through full personal protective equipment.

After enduring years of terrible icepick headaches, Jack was diagnosed in 2005 with aphasia, a condition that can affect a person’s ability to speak, write, and understand language due to damage in the brain, sometimes the result of mini-strokes.

While Jack was still independent at the time, the family decided soon after that he should move in with Brigitte and lifelong friend Nichole so they could keep an eye on his progress.

A couple of years later, Nichole died suddenly, leaving 24-year-old Brigitte to care for her father alone. After some time, the two moved to a new home. These unavoidable changes seemed to, unfortunately, take a toll on him, and by 2009, Jack began secluding himself, often saying the opposite of what he meant, and having difficulty with time and its passage. But they coped for a while, with Brigitte planning activities and ensuring her father was safe, happy, and living well.

Then, in the fall of 2010, experiencing terrible headaches, agitation, and cyclical vomiting, Jack was refusing to eat or to rest. Confused and anxious, he was also having difficulty regulating and expressing his emotions.

Jack was admitted to the hospital, which turned into a nine-month stay. With this break, Brigitte realized that, in trying to protect her dad, she had been oblivious to what was happening, and when doctors told her that he could not return home, she understood that he required greater nursing care.

Only in his early 60s, Jack had needs that were difficult to accommodate by a psychiatric team specialized in providing geriatric care, and over the next few years, he was admitted and discharged from several homes and hospitals.

His symptoms progressed to primary progressive aphasia with frontotemporal dementia, an umbrella term for a group of uncommon disorders that primarily affect areas of the brain associated with personality, behaviour, and language. He had moments of aggression and stubbornness that could only be alleviated by his daughter, and staff summoned Brigitte frequently to come help

In turn, she started getting support from the Dementia Society’s Care Coaches, who encouraged her to keep her dad’s life as normalized as possible with day trips and social outings.

Jack participated and enjoyed Spark!, a joint program between the Dementia Society and the National Gallery of Canada, as well as Rayon d’Art, the same program in French.

“On the way back to the home, he would be so lit up and happy,” Brigitte remembers.

Then the Covid-19 pandemic hit, and long-term care homes announced they would be closed to visitors. Brigitte was visiting Jack that day and, on leaving, told him she’d see him in a couple of weeks.

They were separated for more than 50 days. Then she learned that isolated for so long, Jack would not eat. When Brigitte was finally allowed in, she played music and coaxed him to eat a bit. Everyone hoped he had maybe turned the corner, as he’d done in the past.

But a couple of days later, Brigitte was called again. This time, when she saw her father—strong one week and dying the next—she knew it was the end of their journey. Fortunately, she was in time to be able to be with him and hold his hand as he passed away peacefully.

“That experience itself was beautiful,” she says. “But now, I am all of a sudden 15-years’ worth of tired. Looking back, my advice to other caregivers is to reach out early and get help, and not to try to do everything by yourself!” The Dementia Society of Ottawa and Renfrew County is a resource with Care Coaches for support and educational and social/recreational programs.